Simsbury, Connecticut's Belden Forest will be in the spotlight on October 25, 2019. Ecologist and author Dr. Joan Maloof, founder of the national Old-Growth Forest Network, will lead a public induction of Belden into the Network. Belden is Connecticut's very first member of the OGFN, meaning it will forever be available to the public and will never be logged, allowing it to revert to old growth conditions; it's beautiful and already well on its way.

The OGFN's mission is to preserve and protect the few remnant old-growth forests in the United States, and to eventually designate at least one forest in every U.S. county (in which forest can occur) to be set aside to become old-growth once again. So far, over 100 such forests have been dedicated in 22 states.

The fact that Belden Forest will become part of the Old-Growth Forest Network is due largely to the efforts of Simsbury's own Professor Susan Masino of Trinity College, who is the Network's volunteer County Coordinator for Hartford County.  Professor Masino, a neuroscientist, knows the physical and psychological benefits humans can and do derive from intact, mature forests, and has worked above and beyond the call to protect as much of our forestland as she can.

As part of this event, there will be a public showing of our The Lost Forests of New England film on October 24, 2019, in the Simsbury, CT public library, at 6 pm. The documentary film shows what old growth forests typical of central New England once looked like; describes what happened to them once European settlers arrived; discusses the importance of pristine forests; and presents some of the old growth forests we have remaining.

Several prominent scientists are featured in the film, as is Bob Leverett, who is widely recognized as an expert in eastern old growth forests, and co-author of the book "The Sierra Club Guide to the Ancient Forests of the Northeast".

Following the screening, there will be a panel of experts to answer questions, including Bob Leverett, Joan Maloof, Susan Masino, and Ray Asselin (the filmmaker).

Library seating capacity is 150; judging by past screenings, that may not be enough, so please do register in advance (here).

You can learn more about Joan Maloof and the OGFN at the Old-Growth Forest Network website. 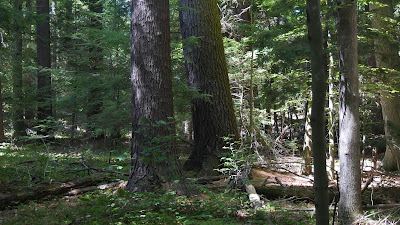