Forester and ox-team logger Tom Jenkins of Blue Dog Forestry in Westhampton, MA, recently sent photos of some incredible sassafras trees (Sassafras albidum). They're beautiful; arrow straight, and taller than any I've ever seen. I suspect it was a slow day for Tom; probably for his own amusement he wanted to find out just how quickly I'd jump to come see these giants.

I immediately contacted my expert tree-measuring cohorts from the Native Tree Society, Bob Leverett and Jared Lockwood, to have them accurately determine the trees' height using laser instruments. Bob was not feeling well and was unable to make it, but Jared and I were on site the very next day.

After meeting Tom at the home of the landowner, a short walk put us in a small gully with a running stream flanked by grand old sugar maples, black locusts, ashes, bigtooth aspens, elms, basswood, and twenty-four to thirty super sassafras. This early February day was chilly and mostly overcast, and devoid of green foliage. But there was an unobstructed view of the trees, from the ground to the treetops; that would make Jared's task of measuring the heights a fairly simple one.

So, just how tall are these new Massachusetts state champions-to-be? Well, hold on just a minute. Let's first review some sassa-facts.

Before Europeans settled here, 16th century explorers scoured the coastal forests for highly valuable sassafras, which Nicholas Monardes, a doctor in Seville, had declared to be a cure for all manner of ills: pain, colds, rheumatism, even syphilis, which was a problem for folks across the big pond (we won't elaborate further). During the colonial era, tons of sassafras were shipped to Europe. Tobacco was a leading export, but sassafras was right up there too. Unfortunately, it was the tree's roots that were needed, so a given tree's medicine could only be harvested once, leading to a great reduction in the number of trees to be found. Eventually, the curative powers of sassafras were found to be lacking, and demand for it fell.

Sassafras was also a spicy flavoring agent for root beer, candy, and other foods, as well as fragrance for soaps and perfumes. Southerners were fond of chewing on its tasty roots. In one of its famous southern culinary roles, its dried, crushed leaves make "filé" powder, used in filé gumbo. The safrole contained in the tree's root bark has been found to possibly be carcinogenic, however, so its use in foods is not recommended.

The wood of sassafras is quite durable in contact with the ground, so it was used for fenceposts, as well as in furniture and shipbuilding applications.

Sassafras occurs sporadically throughout the eastern forest, offering a fragrant treat to all who pass by. Scratch a green twig with your thumbnail, crush a leaf, or even crumble a bit of the bark; you'll likely be delighted with the spicy, fresh aroma.

You can recognize the sassafras by its light green twigs, and its three leaf shapes... some are elliptical (1-lobed), some mitten-shaped (2-lobed), and some "ghost"-shaped (3-lobed). Many people find the mitten leaf particularly charming. Curiously, the three leaf shapes are not found randomly distributed on more mature trees. The 1-lobed, elliptical leaf tends to occur at the near and far ends and upper side of a shoot, while the mitten and ghost are most often found more centrally along the shoot, and more often on its undersides, and primarily on younger, vigorous shoots.


Generally (certainly at least here in New England), sassafras trees are relatively short, reaching maybe 50 feet to 60 feet or so, often less. Mature trees require ample light, so they tend to be found in forest locations where a canopy disturbance allows sunlight to penetrate below the taller competitor species. The typical sassafras trunk is somewhat contorted, due to the tree's growth response to shifting light conditions. Usually, where you find a larger specimen, you'll find a number of shorter and younger clones nearby, which have arisen from root sprouts.

Come autumn, sassafras foliage can be a spectacular show of fluorescent orange, yellow, and red. 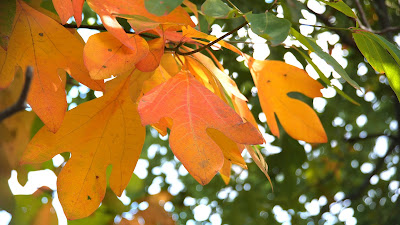 
Ok, back to our Westhampton superstars. Jared went to work measuring the tallest and largest of the more than two dozen sassafras trees in this grove of beauties. Tom and I assumed supervisory roles, and discussed heady topics of great importance to humanity (well, at least to two of its members). Within minutes we received a shouted report... "they're all over 100 feet tall !". This was incredible. We just don't see straight-boled sassafras trees anywhere near 100 feet tall in these parts. "Wait... this one's 110 feet !".

Then my cell phone rang. It was Bob Leverett. Despite illness, he couldn't stand the suspense any longer... "what's the report??", he queried. When we responded with "they're over 100 feet", I'm pretty sure I heard Bob's head hit the ceiling. "Holy cow! That's incredible!". If you happen to know Bob, you can imagine his excited state.


A few hours later, Jared had finished measuring seven of the very tallest of the bunch. The king rises to 112.0 feet! The greatest diameter-at-breast-height (DBH; diameter at the standard of 4.5' above ground) Jared found is 23.6 inches.

Sassafras has been found to reach 120 feet in New York state, and top 130 feet in the southern Appalachians, but even in those forests 110 or more feet is super. In New England, it's tremendous.

Jared's careful measurement results so far are as follows:

The last two trees above will be submitted to the Massachusetts state register of champion trees, and will surely be new state co-champions (sassafras is not currently represented on the list).

Some of New England's forests are slowly recovering from the heavy deforestation of past centuries; where allowed to, they're gaining age, size, structure, biodiversity, carbon storage, solitude, and beauty. But sometimes, even in younger stands there are unexpected gems to be discovered by those with a keen eye. Thanks Tom!