If I had to choose just one kind of natural habitat to spend all my outdoor time in, it would have to be a beaver pond. Ideally, it would be deep in an old-growth forest. But, old forest surroundings or not, it would be a pond. Why? Because there's so much wildlife to be found there, more so than any other habitat I know of.

That's why it's been a longtime plan to create a film about such places. Initially, the thought was that it should cover a full year's time at ponds, and would likely be a one-hour film. Several years ago, I started gathering footage of as wide a variety of beaver pond-related creatures as I could. When it came time to start putting the film together, I realized that there was far more to include than I had thought. It took two one-hour films to cover spring; and even at that, a lot was omitted.

The plan was then to do one hour on summer. Well, that won't be enough either. "Beaver Pond Wildlife Part 3: Early-Mid Summer" is now completed... another one-hour film. Part 4 will likely be "Mid-Late Summer", followed by further episodes covering the rest of the year.

Many viewers of Parts 1 and 2 have posted encouraging and gratifying comments on the Youtube channel, and have been eagerly awaiting Part 3. I'm quite pleased by the response, and am even happier to have this third hour completed and ready for you to enjoy.

There are some scenes of things that relatively few people have ever personally witnessed; they were certainly new, chance experiences for me as well. And one or two might come as a big surprise to many people. I won't spill the beans here, hopefully you'll soon see for yourself.

So... get the popcorn popped, turn the cell phone off for an hour, and enjoy! Even better- head out to a local pond and experience these things firsthand.

Terrestrial ecologist and author Tom Wessels has a lot of fans, especially in New England. His "Reading the Forested Landscape" book and our film series of the same title are inspiring a lot of people to be forest detectives. There's no one more skilled at interpreting what we see in northeast woods than Tom. If you've ever been on one of his forest walks, you know how interesting his programs are. 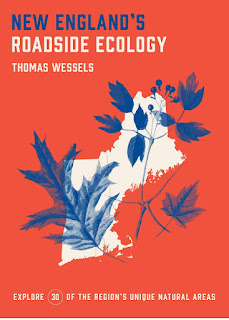 Well, you're in for another treat! Tom has just finished a new book, "New England's Roadside Ecology", in which he takes readers to 30 roadside trailhead locations in the six New England states. At each site, Tom recounts a walk, pointing out unique and special natural features. As always, he interprets many of the phenomena we see but find puzzling, and explains many scientific principles; for example, do you know what "biological cognizance" means? You can find out next month (August, 2021), when the new book will be available for purchase.

One of the sites featured in the New Hampshire chapter of the book is a section of Pisgah State Park. Right now you can see most of this hike in our latest film, New England's Roadside Ecology, with Tom introducing the book and leading the way to a number of stops, explaining what you'll see along the walk. If you've enjoyed our previous films featuring Tom, you'll find this one just as intriguing and informative. See some old growth forest. Learn what causes those strangely bent, curving trees; why some trees have long, spiraling scars on their trunks; why some hemlocks near boulder caves are oddly contorted; why some understory hemlock saplings are "flat-topped", not conical. And more. As a professor emeritus at Antioch University New England, Tom has an effective teaching style that makes him quite popular.

You can watch the film, and many others, on the New England Forests Youtube channel, or in the player window below.

And, by all means, get your hands on this new book, then follow where it leads you to discoveries of your own..

If you'll be in the White Mountains of New Hampshire at the end of July, 2021, you may want to attend a special event.

The Colonial Theatre in Bethlehem, NH, in partnership with Ammonoosuc Conservation Trust, will host a screening of our film The Lost Forests of New England on Friday, July 30, 2021. The program is part of their new "Wild Thing" film series.

The Colonial Theatre is one of the oldest continuously operated movie theaters in the country, having first opened in 1915. According to the theater's website,

Now, after a series of renovations and improvements, the 300-seat Colonial offers state-of-the-art digital projection and surround sound for independent and world cinema, hosts Grammy award-winning performing artists, family entertainment, and community events from May through October—all without losing the intimate charm of a vintage summer theater.

The Colonial Theatre is on New Hampshire Registry of Historic Places and was named 'Best Vintage Movie Theatre' by Yankee Magazine."

Following the film screening, there will be a Q&A session with old-growth forest expert David Govatski, who is the Carroll county (NH) coordinator for the Old-Growth Forest Network. The OGFN was founded by Dr. Joan Maloof, who appears in the film; its mission is to identify and help protect at least one forest in each county of the U.S. where forests can grow. More than 100 such forests have so far been dedicated.

In "Beaver Pond Wildlife: Part 1 - Early Spring", we began a series of films to document a year's wildlife activity at beaver ponds. Initially, the thought was that a one-hour film would be enough to cover four seasons. But as we spent long days gathering footage over a few years' time, it became apparent that there was going to be more material we wanted to include than could be crammed into a single one-hour film. So, Part 1 covers only early spring. And it has been quite gratifying to see the response: in its first four weeks, it has been viewed on Youtube more than 50,000 times. At that rate, it's on track to quickly be the most popular film we've done. Many positive comments have been posted on Youtube. It's all very encouraging.

So now, we're happy to announce that "Beaver Pond Wildlife: Part 2 - Late Spring" is completed, continuing the chronological flow of wildlife activity. There's so much that could be included in a documentary project about organisms in a pond environment. Not everything can be covered, obviously, and it becomes a challenge to decide what to omit. So we've concentrated on the things that most visitors to a beaver pond have a good chance of seeing for themselves, and some things that aren't so obvious to a casual observer.

Some of the subjects you can expect to see include nesting birds, such as ospreys, great blue herons, bluejays, yellow warblers, redwing blackbirds, and phoebes; mating northern water snakes and snapping turtles; young beavers dispersing and building a dam; dragonfly larvae emerging; a pileated woodpecker feasting on ants; and much more.

Our hope is that more people will become aware of the marvels of life that are accessible for viewing at their local beaver ponds.

You can view these beaver pond films, and others, at the New England Forests Youtube channel.

We suggest you view them in sequence, beginning with "Beaver Pond Wildlife: Part 1 - Early Spring". To go directly to Part 2, click here, or on the player window below.

In a place like New England, or most anywhere else in the country for that matter, those of us who are fascinated by the daily goings-on of animals can get our wildlife fix at a beaver pond. A brief stop at the pond may or may not reward us with some kind of animal action, but a longer stay almost always will.

Things typically don't happen in rapid-fire succession here; rather, there's usually a series of events with periods of relative quiet between them. So, it's become my habit to sit patiently and as still as possible at a pond, hopefully concealed in whatever vegetation is available. I minimize my movements, and try to scan the pond with eye movements only. I'm virtually always rewarded. There may be animals I expect to see (ducks, turtles, etc), but every once in a while, something unexpected appears too. Those are the more "mysterious" creatures that I rarely get a glimpse of... perhaps otters; a fisher; maybe a mink or a bobcat. Or, one of the less charismatic creatures does something out of the ordinary.

The seasons make a difference in what is likely to be seen. Spring brings a flurry of activity, as many birds return from wintering grounds to set up households, and wildlife in general is re-energized and bringing new young into the world. Summer is alive with buzzing insects of all kinds (eg, dragonflies), frogs, and juveniles of many other species make their appearance. In late summer and fall, the great din of life recedes as birds migrate away, and other creatures may be more nocturnal.

Winter is certainly the quietest time, but there is life around the pond, both in and out of the water. It's more demanding to sit patiently in the cold, and I don't do that very often. But there's still much to see and learn... tracks in the snow, for example, can tell fascinating stories. Why, you can even gain a much greater awareness of your own toes, as they scream to be propped up by a warm wood stove!

And while you're toasting your toes, you may want to ease back in your comfy chair and vicariously spend even more time at the pond by watching our newest Youtube film... "Beaver Pond Wildlife: Part 1 - Early Spring". This is the first part of what will be a multi-part series covering a year's time at beaver ponds. Subsequent parts will be available in the near future. I'm confident this series will bring you some things you've never seen.

To watch the film, click here or on the player window below.