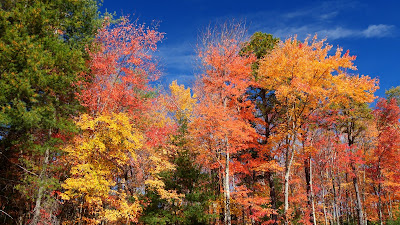 Magic Maple is a mature red maple ( Acer rubrum ) that grows in the northern part of Mohawk Trail State Forest in the Berkshires of western Massachusetts. Magic stands in a small cove above the Deerfield River, one of the most scenic areas in Massachusetts. Some of the tallest, most statuesque trees in all New England grow in this region. 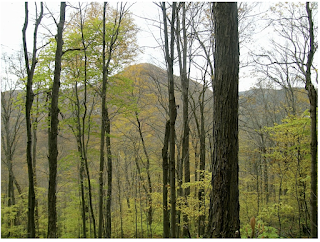 After a short walk among stately oaks, a few black cherries, and younger red maples, if we are looking in just the right direction, the magic one appears. Even from a distance her wonderfully symmetrical form attracts us. Closer to her trunk, her long lines and smooth curves carry our eyes upward into her out-swept limbs. There is a pleasing flow to each of her branches. Her contours stimulate the inner recesses of our brains that love symmetry. 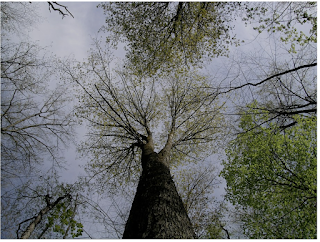 Magic is attractive at all times of year, but it is with her crimson spring flowers and autumn fire that she presents her charms in special regalia. At these times, light filtering through her arching limbs and dappled foliage initiates an odd competition in my head. My left-brain faculties set about trying to decode her form and color toward some analytical resolution, but my right brain synapses simply embrace the gestalt. There is no need to think, only to appreciate and enjoy.

Magic Maple is rooted firmly in the earth. She claims a spot that gives her the vigor to hold competing forms at bay. Other trees are just close enough to keep her growing vertically, but far enough away to allow her to extend her limbs farther out to gather extra sunlight for life-sustaining photosynthesis. In over a century of growing, she has developed a long, straight trunk and a large crown. In the photographs, we see her trunk progressively surrounded by spring's bright green cloak. Only weeks before, the forest presented us with the skeletons of trunks, limbs, and branches.

Seeing Magic Maple from a sufficient distance to preclude quick species identification, she taunts the newcomer marginally familiar with local species. Name my type, she exhorts. Am I an ash or an elm? From a distance, features of her form may suggest either. But approaching more closely, her opposite branching rules out elm, leaving us with the slight possibility of ash, but that species has compound leaves and hers are simple. We search for other clues. The upward thrust of her many fine twigs suggest red maple. As we approach more closely, her bark formally announces her identity: she is a red maple, and proud of it.

A clinical examination reveals no major broken limbs. The pattern of large branches, giving way to small, and then to fine twigging, is in the right proportion. We are witnessing the fulfillment of an arboreal blueprint, complete in the details. Though each species has its blueprint genetically encoded, interferences through seasons of growth can cause aberrant forms to develop, sometimes pleasing to the eye, sometimes not.

In the space beneath her outstretched limbs, she seems to be inviting all to hug her. "I am here to remind all who would dismiss my species that we red maples are proud trees. We have a long heritage of service to all creatures. You humans once considered us your friends. You used our bodies to build your houses and your furniture. Those you call the indigenous people drank our sweet sap. You split and burned our trunks and limbs in winter to keep your dwellings warm. You gloried in our reds in spring and fall. Please don't think ill of us now as you alter the landscape and introduce imbalances that allow us to over-populate, a trait not so different from your own. Remember, we love to seed in where there is disturbance, and in this place, there has been excessive past cutting. But in time, we will adjust our numbers to fit our environment. Will you do the same?"

The area where Magic Maple grows is not old growth, but part of past loggings. Today, Magic Maple has helped to reclaim the land and sends a clear message that her species belongs in the woodlands of New England, left to reach maturity and grow old gracefully. She is a true native with much to offer. 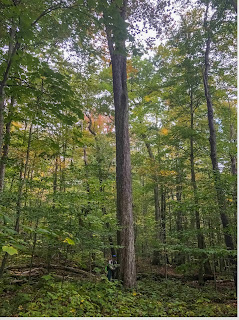 In December, 2008, Magic's statistics were a respectable 8.1 feet in girth and an impressive 118.9 feet in height. These are worthy statistics for a forest-grown red maple throughout much of the species' geographical range, but especially in New England. 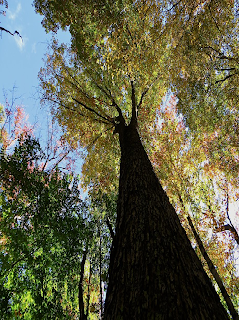 By Nov, 2016, eight growing seasons later, Magic's girth had expanded to 8.9 feet, an increase of 0.8 feet. This translates to an average annual ring width during the eight years of 0.19 inches. Assuming Magic was around 115 years old in 2016, had she been growing at this rate since being a seedling, her diameter would be 43.7 inches, which translates to a girth of 11.4 feet. Magic has been growing rapidly in her post-century life. In the last four years, Magic has increased her girth from 8.9 feet to 9.5. This represents a remarkable radial growth of 0.29 inches annually! Clearly, Magic has been increasing her annual rate of growth as she has aged, reinforcing her dominance.

However, her height was down to 116 feet; crown damage and a beginning area of decay on her north side signaled to me that Magic had passed her prime. At least, that's what I thought then. Loss of vitality can happen quickly with this species, although trees can linger in gradual decline for decades. The normal life span of Magic's species is on the order of 150 to 225 years. But Magic's current rate of radial growth tells a competing story.

The table below summarizes Magic's growth from 2008 to 2020 with CO2 implications.

This table shows the carbon consequences of Magic's remarkable growth, defying the conventional belief that these New England trees slow their growth appreciably after 100 years. To be sure, many do, as competition, insect damage, and disease take their toll, but by no means do all trees slow their growth by 100 years, particularly the dominant ones. Magic's absolute growth surpasses that of much younger, vigorously growing red maples. An example will help.

A red maple 12 inches in diameter and 45 feet tall that grows to a 13-inch diameter (very fast growth) and 47-foot height in a year will sequester approximately 214 lbs of CO2 equivalency. It would take three of these small red maples growing at that very fast rate to equal Magic's current annual increase.

But even if Magic starts going downhill in the near future, her growth accomplishments deserve our admiration, as she shares forest space with impressive examples of white ash, sugar maple, northern red oak, yellow birch, black birch, and black cherry, all seeking to claim the territory as their own. They all grow in individual competition with one another, but they also cooperate in an extensive underground community connected by a lattice work of many species of fungi.

As impressive as the above numeric description of Magic is, it isn't her dimensions that endear her to me and my wife, Monica. Many trees of other species in Mohawk Trail State Forest are larger and taller and quite handsome. But Magic Maple is a projection into physical time and space that artists seek to render on canvas and poets labor to paint in words -- timeless expressions of nature's beauty. To our eyes, Magic is an exquisite manifestation of natural creativity that beckons us to admire her for her beauty.

- ~ -
Watch the film at our New England Forests Youtube channel.
No comments: