Bill Finn, well known and appreciated for his volunteer trail work on Mt Tom in Western Massachusetts, recently sent me some photos of sprouting and fruiting American chestnut trees from Mt Tom. He saw the trees in an area that was clobbered by a severe microburst nearly three years ago, in October, 2014. The bushy chestnut sprouts had flowered; some now had small burrs on them, the prickly husks that contain the chestnut fruits (ie, nuts).

Since American chestnut trees were virtually wiped out by the chestnut blight of the last century, we never see mature chestnut trees here anymore. A very few do still exist here and there in the U.S., but I personally know of only one site (in Vermont) where a few large chestnuts could be found. I and some friends saw those trees, coincidentally, in the same month the microburst hit Mt Tom, three years ago. Every one of them had signs of the blight, and may no longer exist now. The largest was a beauty, 8'9" in circumference at 4.5' above ground. Seeing these mature chestnuts was likely a once-in-a-lifetime experience for me, as I had never seen mature ones before, nor since.

The blight kills the chestnut's above-ground stem, but does not kill the root system; therefore, the roots repeatedly send up new sprouts, which grow for perhaps several years, then succumb to the blight. I've seen hundreds of root-sprouted chestnuts, occasionally some with nuts, but Bill's report raised my curiosity just the same. So I visited the microburst site, which is conveniently along a road on Mt Tom.

While there, I saw the multitude of bushy chestnuts Bill reported, and took note of many other species that are slowly recovering from the beating they took. Among them were basswoods, hophornbeams, slippery (red) elms, hickories, sugar and red maples, red oaks, chestnut oaks, black birch, paper birch, sassafras, bigtooth aspen, sumac, white ash, butternut, and more.

There were blueberries, elderberries, pokeweed, beaked hazelnuts, and grapes. Wildflowers too numerous to mention, witch hazel, and mountain laurel.

They're all thriving in the sun on the mountainside, where once there was a tall canopy of trees that shaded and cooled the roadway.

You have to work quite diligently to keep the forest at bay here in New England; leave a patch of open ground alone for a year or so, and a forest will begin to happen there. The hardwood trees that were snapped off and stripped of limbs by the microburst three years ago are sprouting new branches and foliage. They look like fuzzy utility poles from a distance (see photo), but in time will develop spreading crowns once again. The forest is resilient, and although trees can be destroyed by natural events, they do return.

A forest is much, much more than just the woody trunks we see sticking up out of the soil however. There's a subterranean mirror world below them, with roots that spread just like a crown of branches. An internet of fungal webs connects the trees together underground, and there are scads of other organisms we know little about. It all works as a system we don't understand completely.

At Mt Tom, nature reworked some of her design three years ago. We wisely left most of the downed timber in place (other than what blocked the roadway), and its constituent materials are currently being decomposed and recycled into new trees. It's unlikely that any of the chestnuts will be blight resistant and live long enough to become stately elders of the woodlands, but there soon will be shade over Christopher Clark Road again. Three cheers!

There are any number of creatures and features in our New England natural landscape that draw our attention; some of us are fascinated by bird life, others by large, charismatic mammals. Many are awestruck by dramatic mountain landscapes. For others (not mentioning any names here), being immersed in the mysterious wilds of an old growth forest delivers us from the agitation of life among too many of our own species (don't read too much into that).

Some folks aren't much moved by any of these. I've known people whose central nervous system, I believe, was rewired by Tim Allen: just a bit too much power applied.

Few of us though, I suspect, would utter "ho-hum" if plopped down in front of a waterfall. I wonder what it is about large quantities of water molecules merely being governed by gravity in an overtly obvious way that mesmerizes us. Water flowing in a stream or river is acting under the same influence, and is pleasing (and, at times, exciting) to us. But, drop it off a cliff, and wow! The crowds will gather. The jaws will drop. The faces will smile. The legs will bring their owners as close as possible to the spray. 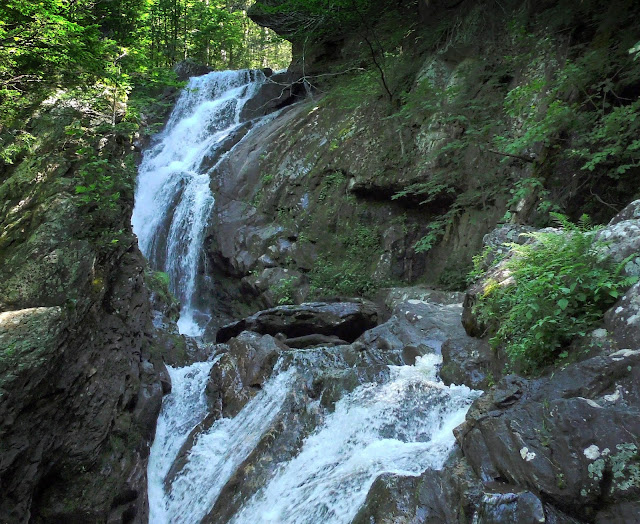 I suppose a waterfall is a symbol of freedom from all constraints, an expression of natural power and grandeur. Or, maybe it's just a nice place to play on a hot summer day. Or all these things. The thundering of a cascade at any time of year is inspirational and therapeutic. The misty spray mixes with clean, oxygenated forest air to rejuvenate our stale senses. And it doesn't have to be a Niagara to have these effects. 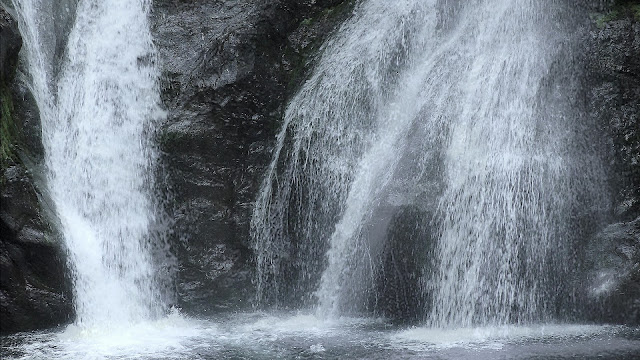 I especially like to see a waterfall in slow motion, where you can see individual globs of water experiencing freefall; where a solid sheet of water becomes a punctuated veil of droplets.

And it's easy to appreciate how a long-exposure still photo transforms a silvery fluid thread into a dreamy white, silky scarf. It's not something that exists in reality; it's an artificial scene created through the trickery of camera work. But there's a magical appeal in it, as though we should be able to see flowing water this way, if only we could slow ourselves down enough. 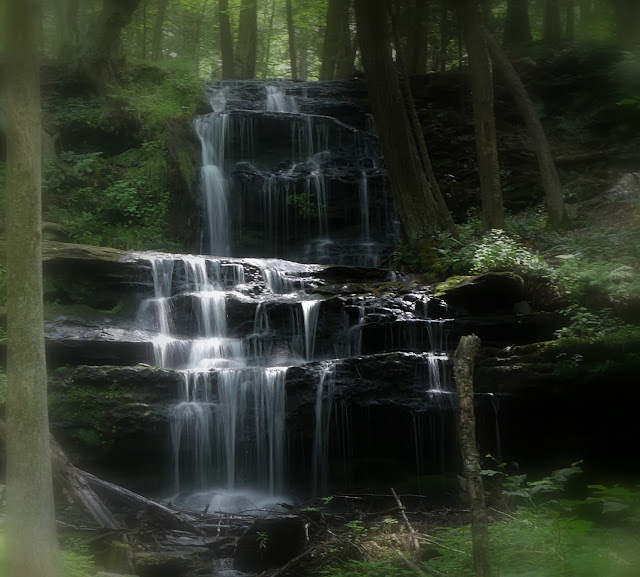 When a waterfall occurs in a dense, timeless old forest, the sense of mystery is heightened. Approaching the base of the falls, it's then even more intriguing to imagine what secrets lie upstream in the unknown. What woodland denizens travel the intricacies of the mossy mounds, the mouldering logs, the hollows under the rocks? How is it this mystical place even exists, and there's no one here?

In fact, for me, even the grandest of waterfalls lose some appeal if they're not in an aged forest; they've been compromised and devalued. An undisturbed, old growth forest has the physical structure (deep soil, interwoven root systems, forest floor duff layer, etc) to do the best filtering job nature can do to provide us with pure water. That's how forests are supposed to be. Just one reason why we should have much, much more old growth forest than we do.

In Western Massachusetts, there is a (shamefully, yet thankfully) small amount of such forest still in existence, approximately 1300 acres in total. Several modest but delightful waterfalls flow in or from these ancient woodlands.


There is a new film, "Waterfalls of Western Mass", that highlights several of these waterfalls and their surrounding forests at our Youtube channel,

Hope you enjoy the film!
No comments:


Bob Leverett, old-growth forest guru, and wife Monica share their account of a trip taken through part of the southern Appalachian mountains with botanist friend Jared Lockwood. All photos courtesy of Bob Leverett, except as noted.