Stars on the Forest Floor

On a recent late-January hike, Deb and I encountered something we hadn't seen before. Nothing new about that, happens all the time. But, it was an intriguing mystery. 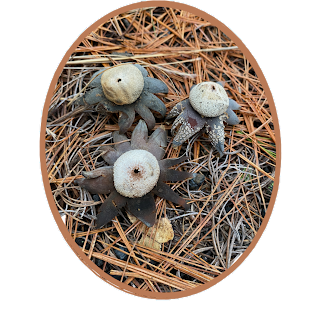 There were a number of small puffball mushrooms on the ground under some small white pines. That's nothing particularly unusual or surprising. But each one was sitting perfectly centered on what appeared to be the dried bracts of some kind of plant. And these things were all just sitting on the surface, not connected to the ground or anything else; it was as if they had fallen from a tree, like the remains of a peculiar flower structure.

I was thoroughly mystified.

So I texted a photo of them to biologist friend Al and asked if he knew what these things were. And, of course, he did, although he's only seen them a couple times. They're "earth stars", a kind of puffball mushroom. So, to the all-knowing web I went.

These puffballs typically grow below, or partially below, the surface of the ground. When they mature, their outer cover layer (the outer "peridium") splits into several "rays" (like a banana peel), which spread open and curl down toward the ground (as in the first photo). When they contact the ground and continue to curl, they lift the inner puffball spore sac a bit above the surface. That exposes the spore sac to raindrops that puff the spores out into the breezes, thereby dispersing them.

The second photo shows an unopened earth star (of which there are many species), before the outer peridium has split. 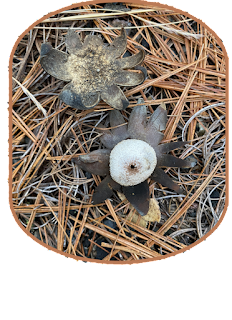 When the mushroom has matured and opened, its former connection to mycelium in the ground breaks down, and the mushroom is now free to be blown around per the vagaries of the wind, spreading spores hither and yon. It would seem that these should be much more common, but several people have told me they've only encountered them once or twice. And they may not be found in the same place you first find them.

The third photo shows the underside of one of the earth stars, and the top side of another.

Nature has added a clever method of getting most of the spores out of some species of the earth star puffball. When raindrops or other things hit a puffball spore sac, the pressure squeezes out a little cloud of spores; that's what typically happens with all puffball mushrooms. But here's the added trick that some earth stars have... if an opened earth star becomes dry, the outer peridium "flaps" will close back up over the spore sac, squeezing it and forcing out more spores, until moisture reopens them. Repeated cycles of moist and dry conditions continue to help the puffball eject its spores.

The last photo shows previously-opened earth stars that dried out in my car overnight and closed back up. I re-moistened them by putting them on a damp paper towel, and they quickly opened right back up. 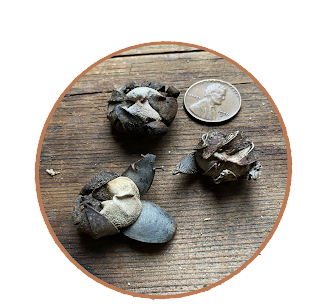 Earth stars are mycorrhizal, a type of fungus that interacts with the roots of many, many kinds of plants, including trees. The fungus, with its vast underground web of mycelium, is very efficient at taking up minerals and other nutrients from the soil. Phosphorous, in particular, is not readily soluble in the soil, yet is important to many plants. Mycorrhizal fungi can take up the phosphorous and deliver it to plants. The hyphae that make up the mycelium are much thinner than plant roots, and can get into more tiny spaces than roots can.

Since the fungus cannot photosynthesize like green plants do, it can't obtain the carbon it needs from the air (from CO2). That's where the plants whose roots it associates with fulfill their part of the symbiosis. The plants supply sugars to the fungus in exchange for the nutrients they get from the fungus. Both parties benefit. In fact, mycorrhizal plants can fare much better when connected to the fungal network. Some cannot continue to exist without it; orchids, for example, must have a mycorrhizal fungus relationship to germinate their tiny seeds.

So, when you're walking in the late-fall or early-winter woods, you don't have to look up to the sky to see the stars... you just might find some right at your feet.