This past winter I began a project to create a video that will be a sampling of the many forms of life to be found in a certain Massachusetts forested state reservation. It will include animals, of course, but also wildflowers and other plants. The original plan was to showcase the trees, supplementing with some wildlife. But when spring broke through the heavy snow cover, it started to become clear that the profusion of wild critters declaring their presence was the dominant theme.

It began in early March. A lot of snow was dumped on western Mass this winter. I had been trudging through it for weeks in February, in search of anything that moved under its own power, since video is mainly about "motion" pictures. There wasn't much of that to be found, at least not by me, not in this place. There was plenty of deer sign, too much in fact. Tracks everywhere. You literally would have a difficult time moving through this forest without treading on deer scat (droppings). Every kind of plant life within their reach had been a survival meal. So I practiced taking video clips of still subjects, such as deer beds in the snow, their tracks, their browse damage; frozen streams, geologic formations, etc. It was getting a bit boring.

Then one cold day (March 9th, to be specific), I hoofed my way to a frozen beaver pond. As I stood there gazing across the still waterscape, a movement on the pond's snowy surface caught my eye. A small critter was clumsily scooting across the pond. Running looked terribly inappropriate for this animal somehow. It had a squat, chubby body with very short legs, a pointed snout, and a rat-like tail. It clearly was not designed to be a runner, yet it was hastily treading across the snow. What rodent sized critter could this be (although it technically is not a rodent)? I quickly got the camera running, which was in slow-motion mode. Here is a frame from the video. 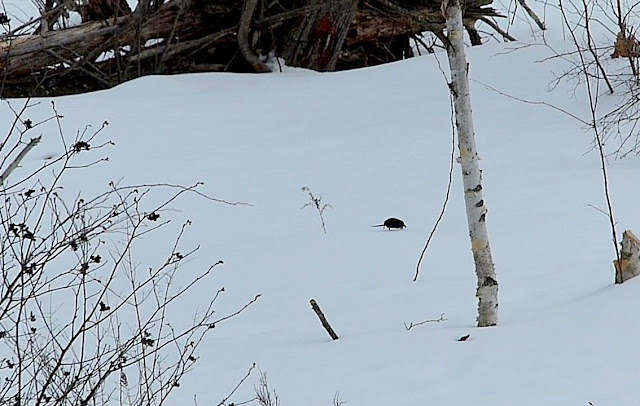 The chunky little thing ran about 100 feet to the middle of the pond, stopped and stood absolutely motionless for close to a minute, then resumed its crossing to the far side of the pond and into the woods. Because of the distance between me and it, it's not possible to get a close look at it, but it appears to be a mole.

That day seemed to be the beginning (at least for me) of a re-awakening of life in the woods. Sluggish at first, it would soon blow the lid off winter's ice chest. That same day, while photographing thawing streams, I was treated to the hammer work of a pileated woodpecker, the largest of its kind here. It was busily removing what wood stood between itself and the insect quarry it was after. This particular forest has the most Pileated woodpecker sign I've ever seen. They chisel wood out of tree trunks in large, typically rectangular excavations. They somehow seem to know which trees harbor carpenter ants in their cores, and will persistently hammer away with great efficiency.

The next major sign of spring I noticed here in the Connecticut River valley was the return of Turkey Vultures to the skies above us. On the wing from their southeastern-U.S. wintering areas, they effortlessly glide in one fine, sunny day. As they float along over the treetops, they use their keen sense of smell to locate even the smallest of dead animals to scavenge. Although many would consider them to be grotesque, they are part of the clean-up crew Nature employs to rapidly remove rotting carcasses from the environment.

With the waning snow, deer were now roaming about more freely in search of food. Snow depths no longer hindered their travel, and they could now scrape up a few acorn meals in the frozen leaf litter. They appear to be healthy, despite the below-zero winter. 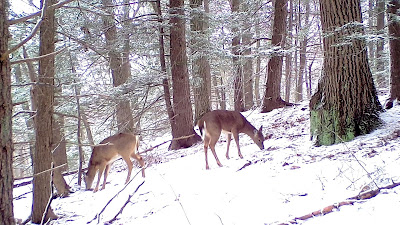 It was now the first week of April. Snow remained in small pockets here and there, but was mostly flowing through gushing, cascading brooks on its way to the Connecticut river and the sea. The roaring streams were a welcomed sight and sound, and I spent hours filming them splashing over the boulders.

I now began to see emerging garter snakes on a daily basis, basking in warm sunshine on the forest floor. They're among the earliest of hibernators to leave the darkness of the underground, sometimes being seen in snow on the surface. Sadly, there's now a fungal disease that's disfiguring many eastern species of snake, causing skin lesions and other symptoms. I haven't yet noticed this on any snake, thankfully.

Other subterranean creatures, such as red back salamanders, were venturing to the surface; turning over bark slabs on the ground can reveal them.

Insects, such as moths, were on the wing. The hoods of purple skunk cabbage were a welcome touch of color in the soggy bottomlands.


Barred owls, active year-round, can be very vocal during the day at this time; I encountered them frequently as pairs of them hooted their "who-cooks-for-you?" calls back and forth across the valleys.

And then, on April 7th, I spotted a dark spot on the thin, receding ice of a pond. "Is that a small stump poking up through the ice? I don't remember one being there before. Oh well, I'll move on". But something nagged at me. I had to double check. With binoculars I took a zoomed-in look. It was an otter! He (she?) was lying prone on the edge of the ice shelf, and chowing down a small fish. It took its time gnawing off chunks of the prey, then, quick as a wink, slithered off the ice and disappeared under water. I thought, "well, at least I got a short treat." But then it suddenly surfaced 10 yards away and deftly climbed back onto the ice. It had another fish! This became a routine that went on for hours, then days! I took advantage of this opportunity and shot the video equivalent of many rolls of film (you remember film, don't you?)


A pair of red shouldered hawks must have been nesting nearby, for I saw them and heard their "keeer" calls regularly around the beaver pond and swamps, where they prefer to nest.

About this time, in late March or early April, another amusing phenomenon occurs in these New England forests. People report hearing the quacking of ducks coming from small vernal pools in the woods, but the ducks disappear as people approach, and all goes quiet. It's the annual breeding time for wood frogs, handsome (?) little amphibians that spend the winter frozen solid in the leaf litter; a special adaptation in the form of an anti-freeze prevents their cells from being damaged by the ice-up. Come spring, they thaw out and eagerly hop across the forest floor in numbers, heading directly for vernal ponds to reproduce. Their peculiar quack-like call can be heard for a long way off, and it's voiced by dozens, or even hundreds of them at a time.

This year, I was fortunate to witness one of the greatest collections of these frogs I've ever seen. There were many hundreds of them, all in a frenzy to reach a small woodland pond. There were dozens of them navigating up a tiny overflow stream toward the pond; they were hopping alongside this trickle, and in it as well. Some were headed away from the pond too. They were everywhere, and it was difficult to not step on them (their coloration blends in well with the leaf litter). Across the surface of the pond, there were ripples everywhere, caused by the frenzied males darting about to grab onto a female. In their zeal, the males often latch onto other males, who squawk out a "release me!" call. In a few days, it's all over, and the pond becomes quiet again; fertilized egg masses lie submerged, and the frogs have dispersed back into the surrounding woodlands.


Waves of birds have been arriving too, migrating north to their breeding grounds. Ovenbirds, warblers, various thrushes, scarlet tanagers, indigo buntings, flycatchers, veerys, vireos, even cuckoos will all be here. And more. Their arrival really brings the woods alive, and quickly. Now there is birdsong everywhere.

Spring is here in all its glory. Well, almost all its glory... it'll take a full complement of spring wildflowers to bring it to full glory, but they're on their way too!


Although there have been creatures moving about in the dark of night all winter, the night time forest sees more activity now. Bears are stirring; raccoons venture much farther from their dens to roam freely. Skunks and beavers, among others, are on the move.

It's now the first of May. Buds are popping, leaves erupting into splashes of pastel colors everywhere. Yellows, light greens, reds. The hardwood trees put on quite a show on the hillsides. Butterflies that overwintered as adults are fluttering by. Life is so good.

The video, "Mt Tom Wild",  is now finished. Read the story and see the video here.