What? Old growth forest in Massachusetts?

Yes, there is a bit of it still intact, believe it or not. And some of it is stunning. What saved it from the axe is its location... on steep, difficult-to-log mountainsides. These places often grow boulders as efficiently as they do trees. But the combination of the terrain, the boulder fields and ledges, the soaring trees, and the lush green carpet of ferns and mosses make these relic forests irresistible to me.


These sites typically also have moist soils, which contributes greatly to the verdant carpet of ferns, lichens, and mosses. The steep mountainsides can offer a wall of protection from high winds, but are not 100% effective; trees do get toppled and broken. But their carcasses slowly decompose on the forest floor, creating ideal seedbeds for such small-seeded species as black and yellow birch to establish themselves. Over time, their constituent elements melt away into the soil to eventually be recycled into new trees and other living organisms.

To be sure, there are some good-sized trees found here (ie, large circumference). But competition for light tends to favor height before girth, and wind and storms knock many down before they get too large in diameter. As a result, the truly old forests of this region (New England) may not have the look that most of us might imagine. That is, the virgin forests here would not be dark, sinister, foreboding haunts consisting of huge-diameter, crooked and gnarly giants with massive, spreading limbs. Fat trees with low and spreading limbs are not grown in forests, but rather in open spaces where light is plentiful. 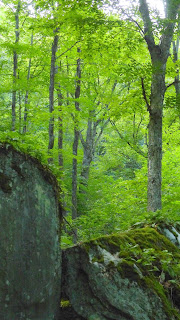 So, the trees in these forests tend for the most part to look a little slimmer, but with impressive heights (often 120 feet or more) and few side branches under the high crowns.

When a tree does blow down, a hole is opened in the canopy. Sunlight streams down and its energy is rapidly put to use building new plant life. The crowns of trees surrounding the hole quickly grow in response to the light and, if the hole isn't too large, may soon close the breach in the canopy. If the hole is large, new or existing sub-canopy trees will shoot up into the light. Either way, it won't be terribly long before the canopy is closed again. But the cycle will be continuously repeated in random places in the forest, so an old growth forest will be a patchwork of different age classes, from seedling to sapling to senescent. 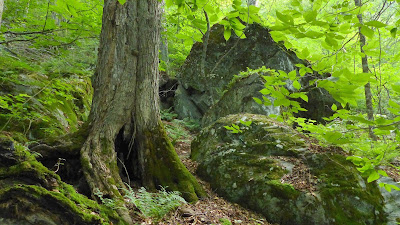 So, contrary to how some may imagine a northeastern old growth forest looks, it is not a dark, Disney-like place full of huge diameter, gnarled trunks with twisty side limbs. Neither is it a Pacific northwest redwood-like forest of 200-foot tall hulking giants. 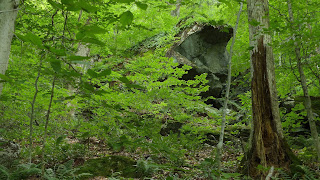 Somewhere between those two examples lie the New England old growth hardwood forests. Yes, there are some impressive individual trees here and there. But by and large, our old growth is as described above... a blend of many ages and sizes. The 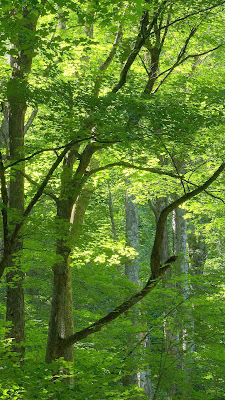 older trees may be hundreds of years old; they may easily reach heights well in excess of 100 feet, up into the 130's. Putting on girth in these environments is a big challenge for a hardwood tree though; a 4-foot diameter is an achievement, and some do make it. 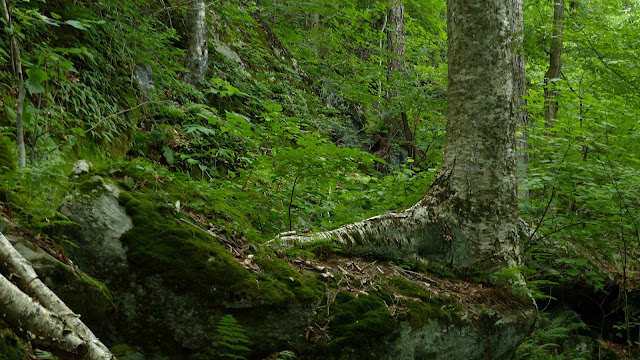 In sites we have left, on relatively steep ground, there is sufficient moisture to support a lush understory of mosses, ferns, lichens, wildflowers, and other plant life. Come mid-summer, these woodlands are simply wondrous places of rugged beauty.

The trees generally have a very tall overall appearance, though there are plenty of smaller ones as well. But they're not an uninteresting, crowded collection of even-aged poles, as you might find in a young second growth woodland.

The forest shown in these photos was recently visited by a man from Chile; in his words, "this place is mystical". I think the combination of mountainside steepness, huge boulders, overall green cast, aged trees, tranquility, mystery, and lighting all played a part in creating that impression. 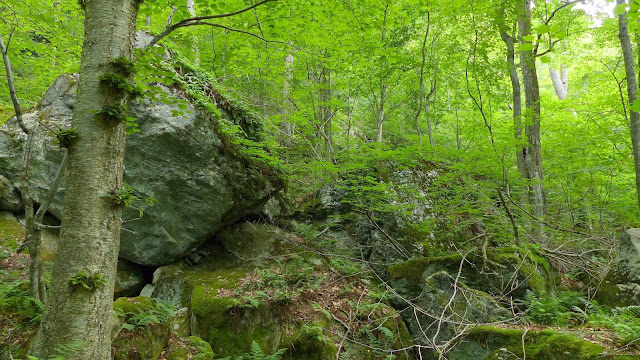 Just knowing that a forest is a pristine, natural, intact example of "what it should be" is enough to instill a sense of reverence for it. Deep feelings of connection to the primal earth may play upon your senses in a place like this. It feels right. It is right.