New England has experienced a vast manipulation of its once-virgin forest lands in a relatively short period of time. There has been an almost complete turnover in forest cover since the arrival of the first European settlers.

Upon the retreat of the Laurentide ice sheet (which had smothered the land under thousands of feet of glacial ice for thousands of years, eliminating all life under it), plants and animals migrated northward to re-establish New England forests. This occurred approximately fourteen to fifteen thousand years ago. 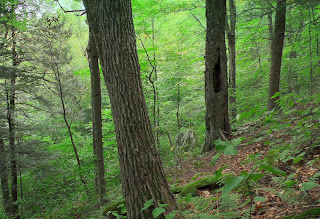 The composition of the forest here has changed since that time, the species varying with warming climate. By the time the first Europeans arrived, New England was largely covered by primeval forest. In some areas, Native Americans had already altered forests, for several reasons. But the forest had never been rapaciously exploited as it would be post-settlement.

The current forest cover we now enjoy is not what it was 350 years ago.

We, perhaps as recreational users, may find today's New England forests to be attractive in many ways, and doing just fine. But is that just because they're all we know? Are we impressed by stands of 10-inch diameter poles, all the same age? Are multi-trunked, coppiced trees the norm in a forest? Why is that grove of Norway spruce there? Why do all those hemlock trees have so few needles? Why are the beech tree trunks covered with blisters?

Do we know what primitive, old-growth New England forests looked like? Those are long gone, aren't they?

Well, yes they are. And that's truly a sad thing to contemplate. But wait-- there are a few small patches of old growth forest still in existence in New England, as hard as it may be to believe. I was literally thrilled to learn that, some thirty years ago, when I went on my first hike with Bob Leverett (I don't think he had much choice in the matter... I had to see these places!). Bob has led the charge in Massachusetts (and much of the rest of the country) to rediscover, measure,  and document remnant old growth forests. I don't know how he's managed to cover as much ground as he has, but I'm truly grateful for his pursuits. He wore out a couple knees in the effort though.

A few years ago, it was becoming apparent to Bob and me, and some others,  that these remaining old stands, with their characteristics of age and almost mystical ambience, needed to be revered, studied, and most of all... preserved and protected. That led to the idea of a film to document our old growth woodlands. But there was a dilemma... these ancient forests are small fragments of what once was, and as such are vulnerable to loss from ignorance of their value and ecological import. They could disappear literally in a matter of a day or two. To be protected, their existence must be known to those who would care enough about them to be vigilant (that would be you). But the other side of that coin is that sometimes, attention by too many well-meaning enthusiasts results in a place succumbing to "too much love". That put us in a tight spot... we wanted to see these remnants protected forever, but not at the cost of losing them to heavy traffic!

Well, the film is now done. We chose to not readily identify specific locations, so as not to promote undue visitation. That may strike some as elitist; we felt it was the best course to take.

The reasons for the need to preserve our only bits of unmanaged, old growth forests are many; they give us a benchmark to compare with what we do to managed forests; they preserve valuable genetic material; they are the best forests that nature can produce in their particular sites; they are complex ecosystems (versus the simplified ones of managed woodlands); so far, they've mostly resisted non-native species invasions. There are more reasons. But one I find to be quite important (no... required) for own my well-being, is the knowledge that such places really do still exist, unspoiled by human exploitation, free of litter, and inhabited by a variety of organisms that belong there just as much as we do.


The film discusses the forests experienced by the first Europeans who saw them and what transpired after settlers took to the land, to the present day explorers and scientists who have rediscovered some real treasures. Featured are a number of prominent ecologists who have studied our old growth remnants.

You can view the film on our New England Forests channel (Youtube), or in the viewer below (may not be available in email feeds).

Please do convey your thoughts about it in the comments section here, and/or on the channel.